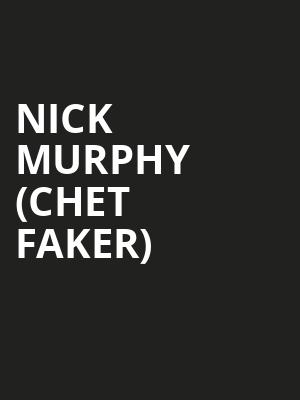 Australia's current golden boy of mellow electro-pop is not just a brooding bedroom musician. He also knows how to work a crowd and a set list.

The artist formerly known as Chet Faker plays a run of Spring dates across the USA and Canada in support of his upcoming album Hotel Surrender. This will be the Australian electronica musician's first tour under his moniker name since 2015, given name Nick Murphy performs under stage name Chet Baker as a homage to his favorite jazz musician.

Though the album is not yet released, Faker has already dropped several singles off the new album including 'Low', 'Feel Good', 'Get High' and 'Whatever Tomorrow' which features Faker's signature sound, groovy!

Sound good to you? Share this page on social media and let your friends know about Nick Murphy (Chet Faker) at Flames Central.