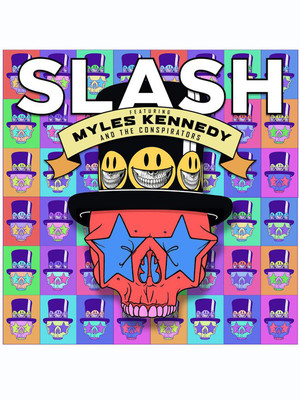 The legendary guitarist tours with Myles Kennedy and the Conspirators

Slash will be returning to the road in 2019 in further support of Living the Dream, his new collaborative record with Myles Kennedy and the Conspirators. It's the follow up to their 2014 record World On Fire, an indulgent, solo-laden odyssey that showcased Slash at the peak of his axeman powers.

One of the most famous figures in American rock history, Slash made his name as the lead guitarist of the controversy-baiting, world-conquering Guns N' Roses, supplying the classic riffs to Sweet Child O' Mine, November Rain, Paradise City, and many more. His various other projects have included Velvet Revolver and Slash's Snakepit, as well as a string of bestselling solo records.

Epic- the greatest of the greats more

Eric: “Slash was a MONSTER”

Sound good to you? Share this page on social media and let your friends know about Slash at Grey Eagle Resort & Casino.