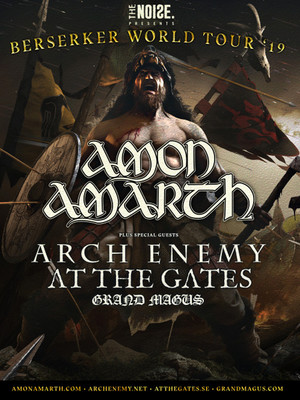 Amon Amarth is a Viking-themed, melodic death metal band from Tumba, Sweden, founded in 1988, and named after an alternative name for Mount Doom, a location in J. R. R. Tolkien's Middle-earth. 2019 sees the five-piece head out on tour in support of their latest album, Berserker! Don't miss your chance to see this eclectic band live!

Following the success of their 2016 release Jomsviking, Berserker debuted in the number one spots in Switzerland and Germany as well hitting number five in their native Sweden! Amon Amarth regularly uses ancient Norse mythology to influence their songwriting, so don't be surprised to hear tracks about your favorite gods and goddesses when you catch them on tour!

If you enjoy heavy metal music, this wasn't only the best metal music concert... more

Sound good to you? Share this page on social media and let your friends know about Amon Amarth at Grey Eagle Resort & Casino.