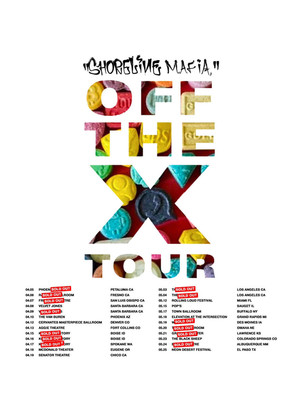 Shoreline Mafia's Off The X Tour

Comprised of Ohgeesy, Rob Vicious, Fenix and Master Kato, Los Angeles hip-hop collective Shoreline Mafia met and bonded over their shared love of music whilst doing graffiti on the City of Angels' streets. Making their professional debut with the release of their first full-length mix-tape 'ShoreLineDoThatSh*t' in late 2017, they introduced the world to a trap-beat-filled, rebellious rap style that has since reinvigorated the West Coast scene.

A vital ingredient mixed in with their exuberant rhymes and hedonistic, party-atmosphere aesthetic is the band's buoyant chemistry and friendship, honed and shaped during the six years it took for the outfit to break into the mainstream. Following the Christmas 2018 release of their third mix tape OTXmas (a tongue in cheek fusion of Yuletid-themed bangers like 'Molly Water' and 'Moving Work') the boundary-pushing quartet is hitting the road on the 'Off The X' North American Tour.

Being a fan of Shoreline Mafia’s energy and sound, I was very excited... more

Sound good to you? Share this page on social media and let your friends know about Shoreline Mafia at MacEwan Ballroom.