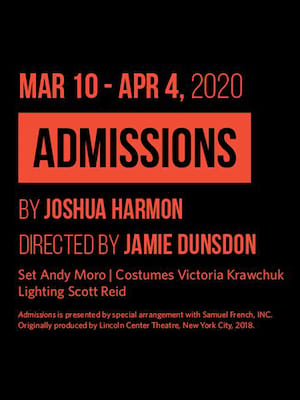 Admissions is yet another stunning, raw, honest and hilarious depiction of humanity by Joshua Harmon, the author of Bad Jews.

Joshua Harmon's Admissions shines a timely light on the negative side to positive discrimination when it comes to getting into one of the most prestigious universities in the country. An admissions director at a New England prep school wants to increase diversity at her own school but her beliefs are challenged when her white son and his black friend are competing for a spot at Yale.

Joshua Harmon is an award-winning playwright who is best known for his 2013 play 'Bad Jews.' Admissions received the Outer Critics Circle Award for Outstanding New Off-Broadway Play and the Drama Desk Award for Best Play in 2018.

Seen Admissions? Loved it? Hated it?

Sound good to you? Share this page on social media and let your friends know about Admissions at Theatre Calgary.